The Nature of Faith

Everyday we continually exercise faith. Ninety-nine percent of every belief or value we have is held by faith. Faith is central to all of life. For example, let’s say you get sick. You go to a doctor whose name you can’t pronounce and whose degrees you’ve never verified. He gives you a prescription you can’t read. You take it to a pharmacist whom you’ve never personally met, and he gives you a chemical compound that you can’t understand. Then you go home and take the pills according to the instructions on the bottle. All the while you are trusting in sincere faith. Faith is also central to the Christian life. The word faith appears 232 times in the Bible.

First, I think it would be helpful to tell you what faith isn’t.

Unfortunately, these ideas of faith are even being taught today in some churches.

Hank Hanegraaff in his book Christianity in Crisis tells the story of Larry and Lucky Parker who withheld insulin from their diabetic son, because they were told that if they merely had faith (if they merely used the force) then he would be healed. Tragically, their son lapsed into a diabetic coma and died. Rather than conducting a funeral, they held a resurrection service, believing that if they had enough faith, that is, if they said the right things and simply believed hard enough without showing any signs of doubt, then the force of faith would bring their son back from the dead. Larry and Lucky Parker were later tried and convicted of manslaughter and child abuse. Why? Because they had the wrong idea of faith.

The gospels in the New Testament (Matthew, Mark, Luke, John) show that the disciples were also often confused about faith. However they were wise enough to ask Jesus about it. In Luke, chapter 17, you see the disciples asking Jesus to increase their faith. And here was Jesus’ response to them: 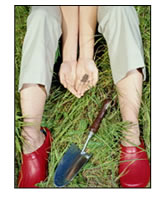 “If you had faith like a mustard seed, you would say to this mulberry tree, ‘Be uprooted and be planted in the sea’; and it would obey you.” Jesus’ response is interesting. Notice He doesn’t say some of the things that we’ve become accustomed to saying in the church. Jesus didn’t say, “You just need to try harder.” Nor did Jesus say, “You just gotta believe.” Jesus’ response reveals an important truth about the nature of faith. The mustard seed is the smallest of seeds. Jesus used that fact to illustrate that it isn’t the size of your faith that’s important. Rather…the power of faith rests in the reliability of its object, not in how confident you may be.

Let me illustrate what I mean. Suppose I’m standing on the edge of a lake during the first cold weeks of winter in the Northeastern part of America. The lake is frozen over with a very thin sheet of ice. Being filled with faith and confidence I take a step to walk across the newly formed layer of ice. Unfortunately, even though I am extremely confident and “full of faith” the result would be a cold, wet shock. As long as the ice is thin, it doesn’t matter how much faith I have. The ice is not reliable.

Now imagine a few months later, after the cold winter has taken effect. The ice is now several feet thick as I stand at the edge of the lake. Because of my past experience, I’m extremely cautious as I think about walking across the ice. I’m not sure whether the ice will hold me. After all, it didn’t before. Even though I’m frightened and have “less faith” than I did before, the smallest most hesitating step will be rewarded by the feeling of a firm footing. What’s the difference? The object is more reliable.

It’s true that the power of faith rests in the reliability of the object. However…

The degree of faith one places in an object is directly proportional to the knowledge of the object.

For example, consider a man terrified of flying. When he first arrives at the airport he buys insurance at one of those coin-operated insurance policy machines. He has his seat belt buckled twenty minutes before take-off and is sure to listen carefully to the routine “emergency instructions.” He has no faith in the ability of the plane to get him to his destination. But, as the journey progresses, the passenger begins to change. He first unbuckles his seat belt, then has some lunch, and pretty soon he’s talking to the person next to him and joking. Why the change? What happened? Is there more faith at 36,000 feet? Of course not. The more he learned about the object of faith, the plane, the more faith he exercised in that object.

It’s the same in the Christian life. The more we learn of the Lord, the more faith we can place in him. Learn to live by the facts of God’s Word rather than your feelings. Spend time in the Bible just observing, asking God to show you more of who He is. There are many places where you could start. Psalms 145, 146 and 147 are three wonderful chapters describing who God is. In all of the Bible, ask God to teach you more of Himself and notice specifically how He wants you to trust Him. In any given situation, ask God, “What about You would be helpful for me to know, as I trust You in this situation?” Go to the Bible and become a student of God and His relationship with you.

D.L. Moody once said, “I used to pray daily for the Lord to give me faith. Then one day I read Romans 10:17, which says ‘faith comes from hearing, and hearing by the word of God.’ So, I began to read my Bible, and faith has been growing ever since.”