Why We Don’t Have to Listen to Satan

It was early January. I had just returned home from speaking at several conferences. I awakened that day depressed and discouraged. I was having thoughts like: “My life is over. You’ve already lived the best years of your life. My ministry is over. It doesn’t feel like God loves me.” Why would I have those thoughts? Where did they come from? And how could I make them go away? By the end of the day I was fine. My spirits were lifted and I had hope. But what did I know and what did I do that brought about the change? That’s what I want to share with you, so that you too can have victory whenever fear or discouragement or some other spiritual battle descends upon you. 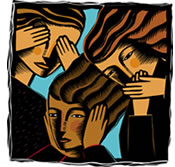 In my years of ministry I have learned that we have an enemy of our souls. You don’t see him but he’s there. 1 Peter 5:8 says, “Be on the alert, your adversary the devil prowls about like a roaring lion seeking someone to devour. Resist him, firm in your faith.” Thus, we resist him by being firm and taking God at His Word.

Who exactly is Satan? He is the one in Scripture who is called the “evil one.” He is not the opposite of God, as if he had equal standing with God, because God has no counterpart. God has no equal. Satan is merely an angel under God’s judgment. Satan attempts to have power over Christians, but we are told, “Greater is He who is in you, than he who is in the world.” (1 John 4:4)

Yet Satan tries to discourage Christians. He tempts us to sin and tries to keep us from believing God. He is our opponent. We don’t see him, but he is there. Jesus himself prayed for us that the Father would keep us from the evil one. (John 17:15)

Satan is referred to in Scripture as the accuser, the slanderer, the father of lies, the murderer, the deceiver, the adversary. Paul says in Ephesians, “our struggle is not against flesh and blood but against the rulers, against the powers, against the world forces of this darkness, against the spiritual forces of wickedness in the heavenly places.” (Ephesians 6:12) We are up against something. In 2 Corinthians 2:11, Paul said that he was not ignorant of Satan’s schemes. We cannot afford to be ignorant either.

We also have no need to be afraid. I would never encourage you to focus on the darkness, though it certainly exists. Instead, I want you to know the victory that we have in Christ…the truth and security that is ours.

How exactly does Satan work? What does he do? Primarily, Satan is in the business of trying to deceive us—trying to make something look like the truth but it’s a lie; it’s a deception. Dr. Neil Anderson of Freedom in Christ Ministries made a very helpful observation. 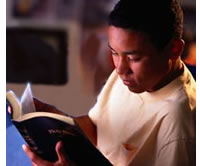 How do we confront Satan’s lies? We look at what God says. So, when you may be feeling like a rotten Christian, for example, because you haven’t spent time in prayer or the Word, or you feel like you’ve let God down in some way and you start thinking, “God must be so disappointed in me, He’s likely to just give up on me.” Well, what does God’s Word say? “He who began a good work in you will carry it on to completion until the day of Christ Jesus.” (Philippians 1:6) And, “There is therefore now no condemnation for those who are in Christ Jesus.” (Romans 8:1)

Or, let’s say that you are discouraged about some sin and Satan is accusing you, telling you that God will never forgive you. That’s a lie. How do we know? What does God’s Word say? “If we confess our sins, He is faithful and just to forgive us our sins and cleanse us from all unrighteousness.” (1 John 1:9)

Here is one more example. Let’s say you become attracted to someone, and this person is saying to you, “Our becoming sexually involved would not be a problem with God, since we love each other so much.” But what does God’s Word say? “Marriage is to be held in honor among all, and the marriage bed is to be undefiled…” (Hebrews 13:4) “It is God’s will that you should be sanctified: that you should avoid sexual immorality; that each of you should learn to control his own body in a way that is holy and honorable, not in passionate lust like the heathen, who do not know God…” (1Thessalonians 4:3-5)

We don’t let our feelings or thoughts or Satan’s lies dictate what is true. God’s word is truer than anything we feel, think or see. Satan tries to cloud our thinking, tries to make us think that God is depriving us from something. But it is God who created us and loves us enough to die for us. In dealing with Satan’s lies, you have to know the truth.

You have to know His Word before it will set you free. We are told to resist the devil, “firm in your faith…” (1 Peter 5:9) Faith is not a feeling. It is a choice that we must make to take God at His Word. To gain freedom in spiritual battle, we take those thoughts, feelings and temptations, and ask, “What does God’s Word say about this?” In John 17, right after Jesus prayed to the Father, “that you protect them from the evil one,” do you know what He said right after that? He said, “Sanctify them in the truth. Your word is truth.”(John 17:17) And Jesus also said, ”You shall know the truth and the truth shall set you free.” (John 8:32)

I’ve discovered that it’s important to know who we are in Christ. In Ephesians, Paul writes, “I pray that the eyes of your heart may be enlightened so that you may know…what is the surpassing greatness of His power toward us who believe,” toward us who take Him at His Word. (Ephesians 1:18,19) God lives in us and empowers us. 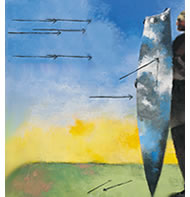 Have you ever thought you HAD to give into a temptation, as if Satan were trying to convince you that this one is too much to resist? Here’s a great verse to memorize, so you can bring it to mind in these times: “No temptation has seized you except what is common to man. And God is faithful; He will not let you be tempted beyond what you can bear. But when you are tempted, He will also provide a way out so that you can stand up under it.” (1 Corinthians 10:13)

Thoughts can become actions; actions can become habits. And it all starts with a thought. God wants us to trust His Word more than we trust our feelings, more than we trust how things appear. God’s Word is truer than anything I may think. It is truer than anything I feel. It is truer than how things appear. The Bible says that, “The grass withers, the flower fades, but the Word of our God stands forever.” (Isaiah 40:8) David in the Psalms said, “Your Word…is a light to my path.” (Psalms 119:105)

Jesus gave this parable to talk about the importance of hearing and acting on what He says… “Therefore everyone who hears these words of mine and acts on them, may be compared to a wise man who built his house on the rock. And the rain fell, and the floods came, and the winds blew and slammed against that house; and yet it did not fall, for it had been founded on the rock.” (Matthew 7:24,25) Jesus goes on to say, “If you keep my commandments, you will abide in my love; just as I have kept my Father’s commandments and abide in his love. These things I have spoken to you so that my joy may be in you, and that your joy may be made full.” (John 15:10,11)

We can stand up to any situation, any thought or feeling and turn to our Rock (Psalms 18:46), the One who loves us and guides us into all truth. (John 16:13) Satan may try to tempt you, discourage you, defeat you. But he is a liar, and we need to confront his lies with the truth of God’s Word. When we actively take up our shield of faith in God’s Word, we stand victorious in Christ.

“Praise be to the Lord, my Rock, who trains my
hands for war, my fingers for battle.
He is my loving God and my fortress,
my stronghold and my deliverer,
my shield, in whom I take refuge…”
Psalms 144:1,2

“I will bless the Lord at all times;
His praise shall continually be in my mouth.
O magnify the Lord with me,
and let us exalt His name together.
I sought the Lord, and He answered me,
And delivered me from all my fears.
O taste and see that the Lord is good;
How blessed is the man who takes refuge in Him.
Many are the afflictions of the righteous,
But the Lord delivers him out of them all.”
Psalms 34: 1,3,4,8,19

“It is good to give thanks to the Lord
And to sing praise to Your name, O Most High.
To declare Your lovingkindness in the morning,
And Your faithfulness by night.”
Psalms 92:1,2

Excerpted by permission from the book, Faith Is Not a Feeling, by Ney Bailey.